2016 offerings from Pivot and Santa Cruz, aka “bikes we likes”

2016 offerings from Pivot and Santa Cruz, aka “bikes we likes”

If you’re like most of us here at the shop, you may already spend your free time on the internet ogling the latest offerings from your favorite bike makers, comparing geometries and crunching millimeters as you search out that next perfect bike.  If that’s you, this post may be a bit redundant.  However, if you’re just at the beginning of your quest for dirt shredding perfection, let us shed some light on some exciting prospects for 2016.

A lot has changed since the birth of the mountain bike, certainly more than we can cover here, so we’ll focus on what’s recently new.

Dual suspension bikes have been around for a good while now.  Even as recently as 6-8 years ago though, riding a dual suspension bike meant sacrifice; you could have the climbing efficiency and speed of a hardtail, or you could have the comfort and descending prowess of a dual suspension…but you couldn’t have both in the same bike.  The industry has been doing their due diligence to close that gap though, and AMAZING strides have been made in suspension design and shock valving.  It’s now possible to have a bike with 150mm of travel (6″) that you can still pedal around all day.  And we’re not talking wallow-y, pedal-bobbing your way down the trail, simply enduring the pedal portion of your ride either.  This is legitimate, speed-inducing acceleration.

Whereas before you’d have a bike on either end of the spectrum, these days those bikes on the end can reach far more toward the middle, giving you a more capable, versatile ride.  Case in point, the new Pivot Mach 429 Trail.  This is a bike that has just 116mm of travel in the rear, but thanks to suspension design and refined geometries, feels like a bike that can handle much more.  And it does!  Even hopping on this in the parking lot, you can tell this bike rips.  Here’s a bit more on the 429:

“Immediately we dropped into Skyline, a trail riddled with enough razor blade-sharp rock gardens to draw the ire of any health insurance policy. Right off the bat, I was blown away at how well the measly 116 mm of rear travel was sucking up every single rock garden. I hadn’t ridden a bike with this little rear travel since owning a hard tail, and felt like I had waaay more suspension to work with.”  –Teton Gravity Research

“Chris Cocalis, Founder of Pivot, explained that he took the best features of the Mach 429 SL and combined that with the hugely popular Mach 6 to create an All Mountain Trail category of bike with enough performance to “make you forget about wheel size”. With 116mm of travel, the DW-link suspension design is matched to a bike with a slack front end and a short rear end to keep the bike nimble and to help avoid the “sluggish” feeling that so many riders complain about when trying to flick a 29er around.”  –MTBR.com

The next couple bikes come to us via Santa Cruz Bicycles.  Both the 5010 and the Bronson models have been in the line up previously, but the 2016 models both saw revisions for this year.  Among the changes were slacker head tube angles, which seems to be a trend these days for many brands.  This means the bike can handle the steep stuff better when you decided to point it down…but what about the handling?  To help offset the ‘sloppy’ feel of having a more raked out front end, the seat tube angles are steeper for 2016, bringing you more over the pedals.  All in all, you get bikes that descend just a bit better, and still pedal incredibly well thanks to Santa Cruz’s VPP suspension design.

A few words about the 5010 from DirtRagMag:

“For many riders, bikes like the venerable 5010 are the Goldilocks trail bike. Just enough travel and stability to tackle a wide variety of terrain without feeling under- or over- gunned for much of it. All of the lower, slacker, longer updates that have trickled to the 5010 strive to maintain that same balance, while keeping pace with the progression of both bikes and riders.

The 5010’s head tube angle is now 67-degrees (same as the previous Bronson), seat tube steepens up to 73.8 degrees, bottom bracket drops to 13.1 inches and chainstays have shrunk to 16.7 inches. All numbers that make this 130 mm-travel bike sound like a whole lot of fun. The 5010’s wheelbase has grown to 44.9 inches on a size medium.”

With all of these changes happening to the 5010, we here at Life Cycle see this as being THE bike to ride this year for the 27.5 wheel size. 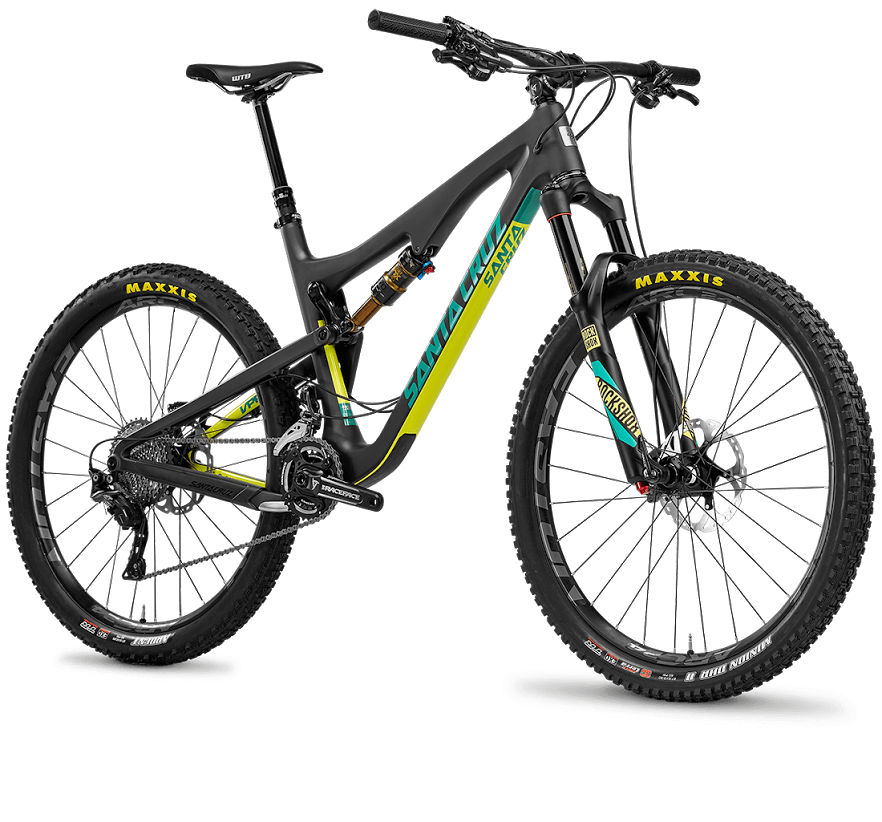 Finally we come to the 5010’s big brother, the Bronson.  Admittedly, the previous model Bronson was tough to beat.  It had enough travel to handle all but the gnarliest chunder, and still remained a bike that you could pedal to the top of the trail and beyond.  Keep in mind that Santa Cruz is not a company that pumps out a new model every year for the sake of a calendar date.  They make changes only when they feel that they can improve–the only annual change is going to be paint color (so if that Kalimotxo Pink color doesn’t do it for you, there’s always Black, or 2017 to look forward to).  The Bronson saw similar updates as the 5010–longer top tube for a roomier cockpit, 1 degree slacker head tube angle, shorter chainstays, and Santa Cruz tells us that these were all changes people were asking for.  Initial reports indicate that Santa Cruz knows what they are doing–somehow this year’s Bronson got even better.  We will say, though, that while the Bronson is in an even better position to tear up the steeps, the 5010 is probably the more well-rounded of the pair.

“Do all the claims really add up to better bikes? We’re pleased to report that they certainly do. Santa Cruz doesn’t mess around, and the bikes perform as stated. Starting with the Bronson, Downieville, California offered up the terrain capable of smashing the bikes into bits, but they ate it up in stride. If we were to fault the former Bronson in one major area, it’d be its ability to perform under heavy hits and a bit of a dead, wallowy feel when pumping and turning. That’s all gone with this new edition. Running 30-33% sag on the FOX Float X Factory DPS shock with an EVOL air can resulted in a bike that can be tossed around every bit as hard as a Nomad without harsh bottom outs, plus it’s more apt to gain speed when you put some pump into it. Thanks to the revised leverage curve and EVOL can it’s quieter over the small chunder too, allowing you to skip over the rough without any unwanted surprises.”  –VitalMTB.com

“From the first moment I swung a leg over the new Bronson, I felt immediately at home. All of the geometry changes make for an up-over-the-pedals riding position that’s ready to attack climbs, while the other geometry changes, 800 mm-wide Santa Cruz handlebar and 150 mm-travel dropper post encourage more aggressive descending.

Here’s the Bronson in Black 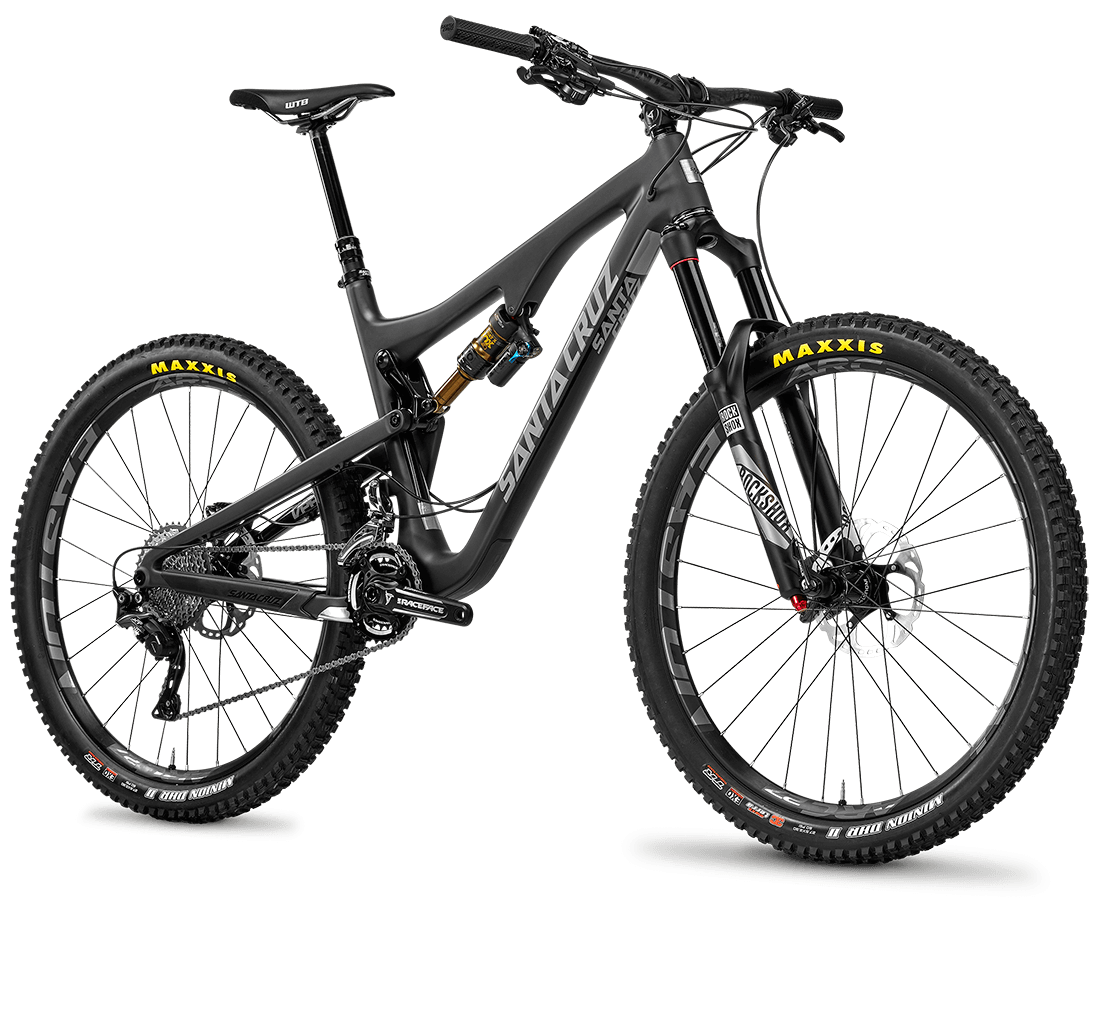 And my favorite, Kalimotxo Pink! 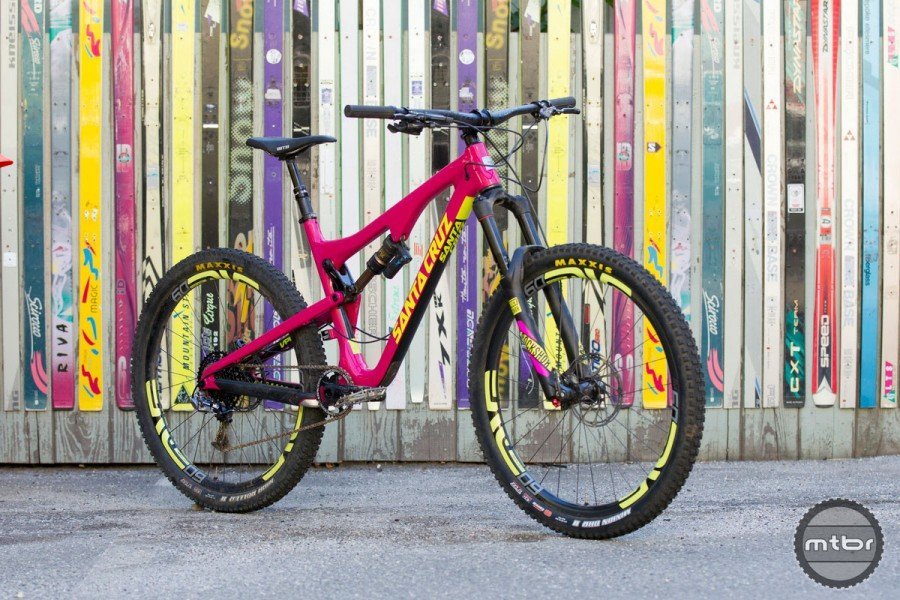